Give Me Back My Profession!

When I started teaching in the mid 90's, I remember hearing the stories of my more experienced colleagues about their protests and union lines, marches, and even those they knew that went to jail so that we could have the profession as we knew it.  They legitimized one of the most important professions there is. They put their salaries and jobs on the line.  They put their reputations on the line.  Why?  Someone had to stand up for the children.  The profession is about the children.  I "got it" as much as a twenty-something newer teacher could.  I did think it sounded a bit dramatic.

Ha.  Here I am.  I am screaming as loudly as I can for my students and my profession.  This isn't right.  What's happening in eduction is wrong.  It is bad for children.  It is bad for teachers, facilitators, and leaders.  Common Core State Standards, PARCC, SGO's (be glad if some of these acronyms are foreign to you), Pearson, Common Core kits, data collection -- mostly for the sake of collecting data, etc.  I'm putting my reputation on the line every time I speak or write my feelings about this topic. This is not how to energize, guide, or inspire our future generations.  They are our problem-finders.  They will change the world.  It will not happen through analyzing the data.  This data does not inform our teaching.  This is big business.

Now, when I share some facts, past and present, to the newer career teachers they look at me with that "is she done yet" smile.  Then they see me as the alien older teacher who is fighting what we were told to do.  What we have to do.  No we don't!  That's what I'm trying to tell you.  This is not what teaching looks like.  This is not what teaching sounds like.  This is not how teachers feel about teaching.  Our kids deserve more.  No matter how great the school, its teachers, and its leaders, it will change.  It already is. 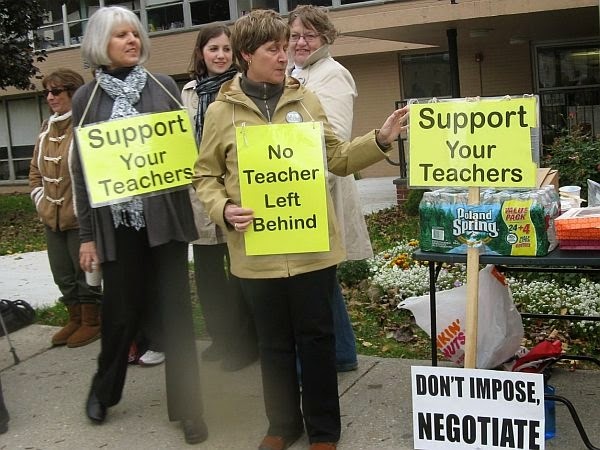 Ask a teacher you know.  Ask them almost anything about teaching.  Used to be, "My kids are so funny this year!"  Or they may jibe, "I've got quite an active group (with a chuckle)."  I bet now your answers, even the positive ones, all begin with a huge sigh.  A sigh of sadness and discontentment.  That alone affects our students.

This is still one of the most noble of professions.  So hold your head up.  Do the paperwork.  But do your homework, too.  Find out more so you can fight for what your students really need.  You are the only one who will.
Posted by audrey k friel at 4:40 PM No comments: 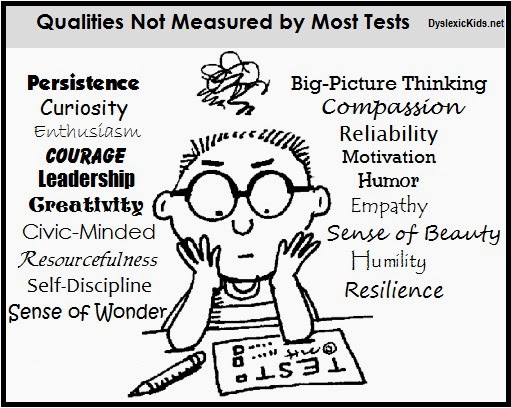 So, my miraculous one pound, seven ounce baby who is now nine, has to either take the NJASK standardized test for New Jersey or stay home in protest, including the make-up days.  Hmmmm, this sounds fishy.

Our schools and laws allow for all children to a free and appropriate education.  How is this appropriate?  I ask myself over and over again.  Being a teacher myself, prepping and administering this test for many years, I have not found any (that's right, any) good reason for standardized testing.  The word alone implicates the system inherently.  Children cannot be standardized.

I have written much about the problems associated with standardized testing and the Common Core State Standards.  Although both are related, they are two different entities with two different major sets of issues.  This new round of tests are supposed to reflect the Common Core State Standards.  That is where they overlap directly.  Please feel free to read more on my blog regarding this issue.  These tests do not measure even what they themselves claim to measure.

However, this entry illustrates the sheer nonsense of testing as we know it.  No standardization will ever describe the character, perseverance, resilience, or grit of a child.  Nor will it ever measure a teacher's ability to teach or the expertise and value of a public school.  This has never been more true and obvious to me than for my son.  Somewhat indulgently, here is some of his story.

Our second child was an invitro baby. Mason was born at 27 1/2 weeks gestation and weighed one pound seven ounces at birth.  He was 12 inches long.  It was a long, arduous journey to say the very least.  There were O2 sats and lines and brain sparing and TPN and grams and PIC line surgery and caffeine and CPAP and nasal cannula and BPD and brain bleeds and and and...  The endless terms continued.  He came home after 3 1/2 months in the Neonatal Intensive Care Unit (NICU) on many medications and monitors.

After a small winter cold weeks after he came home, Mason's lungs needed more support than the steroids we were giving him could.  He went on oxygen. Another "language" and more apparatuses.  At one desperate, sleepless point I frantically drove him to the hospital while he was losing oxygen by the second and turning blue.  He went into full respiratory arrest.

After that, Mason started to refuse to eat, screaming and spitting up.  He was not gaining weight adequately and was officially termed "failure to thrive".  He needed surgery.  It involved a gastrointestinal tube (g-tube) and what they called a Nissen Fundoplication.  This would allow us to tube feed him into his stomach, administer medications, and give any fluids as needed.  The fundoplication made him unable to burp or vomit.  That part was/is permanent.  This surgery was hard and trying.  Using and getting used to the tube on all of our accounts took work and a lot of patience, again, to say the very least.

For his first year of life, Mason was in the hospital every month.  He had multiple episodes of breathing issues, medication issues, g-tube issues.  The details of dealing with this for years are unending.  Another particularly harrowing time, Mason needed surgery to remove his tonsils and adenoids.  Now, surgery for him was not regular or normally advised.  It took much thought, many specialists working together, and courage because he was considered adrenally insufficient.  But, it was decided.  In order to breathe properly and therefore grow properly, this surgery was vital.

Because we were already putting him under anesthesia with one doctor, we wanted it all at once.  So one doctor was monitoring his adrenals/cortisol, one surgeon was taking out his tonsils,  and another surgeon agreed to work together on his g-tube revision at the same time.  Getting doctors together in one OR is no small feat!  The doctors here were just incredible, brilliant, and supportive.  We were advised and knew that the g-tube revision could fail and he could need a new one on the opposite side, now or in the near future.

Incredibly, Mason made it through the surgeries well but couldn't stabilize in the Pediatric Intensive Care Unit (PICU).  He spiked a fever.  Mason had aspirated during surgery and developed pneumonia.  On top of the surgery healing and the g-tube revision healing, he had to recover from pneumonia at the same time.

But yet again this miraculous boy stubborned through.  Of course there are volumes full of stories illustrating his valiant struggles.  These just glean the surface.

Obviously, my husband and I have advocated vehemently for our son since before he was in the womb.  We are not always popular but we are always looking toward what is best for Mason.  We have utilized doctors, nurses, teachers, therapists, receptionists, billing officers, lawyers, hospital administrators, school administrators, secretaries, volunteers, and anyone else we needed to engage to help us care for Mason in the very best way possible.

Over the years, we have successfully gone from gagging at just looking at an empty spoon with a g-tube to now having to limit too many snacks in a day.  We have had a minimum of 8 hours of therapies a week up to 25 hours a week.  We have switched doctors we were uncomfortable with for any reason, even those deemed the best.  We have gotten second, third, fourth, and yes, up to six opinions if we questioned any diagnoses/recommendations.  We have gone from no speech/communication at all - or even pointing - to a slightly speech impaired child who demands to be understood and loves to sing.  We have gone from a bloated, steroid-filled "potato" of a baby to one considered "the mayor" of every single place he goes.

Not only does this miraculous boy read, write, do math, social studies, science, and all other specials and academics.  But even more importantly, our son is empathetic, funny, kind, stubborn, bright, creative, energetic, perseverant, resilient... how many adjectives will you continue to read?  I could go on for a lifetime.  In school they call him the bucket filler.  His future is beaming! He has every opportunity to be a regular kid and grow to live an independent life that benefits himself, his family, and his world around him.  His dad and I could not be more proud or want anything more.

So, what stupid test were you telling us was so important?  And what does it measure again?

It does not measure ANY of the above, academic or otherwise.  It is a shame this amazing boy must grow up in a time of big business running public education.  His dad and I will continue to be by his side.  Always advocating for him, and any others that need.